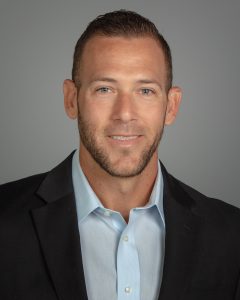 Steven S. Smith is the Co-Founder and President of Guardian Defense. Steve authored and developed his first program in 2013 upon noticing an absence of training for teachers to know what to do in the event of a threat on campus. Working directly with schools and studying various school tragedies such as the Beslan school hostage crisis in Beslan, North Ossetia-Alaina, Russia and more recently, the Sandy Hook Elementary massacre in Newtown, Connecticut, Steve knew he had the tools and skills to develop a program that would make an impact in the community.

Since 2013, Steve and his team of instructors have taught the Active Threat Response Program (ATRP) for Schools to staff at elementary, middle, and high schools; pre-schools; and religious education centers. Additionally, Steve and Guardian Defense previous Lead Instructor and Security Specialist, Carmelo Colon, Jr. created a similar model for the workplace that includes a workplace violence prevention piece. To date, tens of thousands of employees have been trained.

In 2015, Steve expanded his course offerings by introducing the Single Officer Active Shooter Response Course (SOASRC) specifically for law enforcement officers. The SOASRC provides the proper training and skills needed for officers to respond to a threat alone through a variety of teaching styles.

Over the years, the programs for schools, colleges, businesses and places of worship have evolved to encompass more training for not just staff and teachers, but for administration. In 2016, Guardian Defense saw a need for a true wrap-around service, and began pushing the Policy-Train-Drill Standard. Guardian Defense also rolled out a six-month program known as the Full-Scale ATRP for Schools and a similar model for businesses. This specific program is the first of its kind and revolutionizes the way staff, teachers and students respond to a threat, while administrators are taught how to lead their school in safety. This program develops the right procedures for the school and workplace, trains the staff in threat response and sets a foundation for drills and safety exercises. The organization is left self-sufficient and self-reliant at the completion of the program.

In 2016, Steve and the GD team hosted their own summit on school safety titled, “The Ultimate School Safety Telesummit: How to Protect your School in Emergencies and Violent Attacks.” This summit highlighted a number of safety issues that affect our schools today: bullying, drugs, active shooters and natural disasters. Steve interviewed a total of nine school safety experts, including Michael Dorn from Safe Havens International, and concluded with his own session on active threat response options.

Steve has offered free to low-cost seminars to school administrators to assist them in getting their schools up to speed. In 2016, Steve rolled out a program for civilians to prepare for a threat while in public. This program has been presented both at conferences and held open to the public at a local university.

In addition to his work at Guardian Defense, Steve is also a full-time law enforcement officer at a metropolitan police department in south Florida. Since being hired in 2007, he has held a range of positions and responsibilities. In his early years, he worked in the patrol division and then as a detective in a specialized narcotics unit.

Two years post-hire, Steve was selected for the S.W.A.T. (Special Weapons and Tactics) team. He has held roles as an entry operator and as a mechanical and explosive breacher. He also joined a sub-unit within SWAT in 2010 which allows for these skills to be utilized for critical incidents occurring in or near bodies of water and boats. Steve became an Instructor and Team Leader for the sub-unit in 2014 and Team Leader within the SWAT team in 2015.

In 2012, Steve became certified by Broward County Institute of Criminal Justice as a Firearms Instructor. The next year, Steve completed a 64-hour in-depth instructor techniques course geared toward learning the tools necessary to instruct and facilitate presentations. In the same year, he became a certified explosive handler. Steve has also attended numerous seminars on active shooters and motivational speaking. He completed the Active Shooter Instructor Program at the FLETC facility in Georgia in 2014 and has been able to teach what he has learned to other officers within his department.

In 2013, Steve presented his first school safety program to the chief of police who approved it for implementation within the city where he works. Steve left the narcotics unit to occupy a new position for the city in order to teach this program. Within a few short months of its approval, he had successfully trained two schools with overwhelmingly positive feedback. Steve was also responsible for instructing all officers on the local public school board lockdown procedures.

One of Steve’s most noteworthy accomplishments in law enforcement has been his impact on a critical policy changes within the department regarding how police view school intruders. Previously, any trespasser on school grounds during school hours or a school event was treated as a priority “5” call. A priority “5” call is considered the lowest priority and can result in a delayed dispatch and response time. The new policy changes the priority level from a five to a one. Priority 1 requires an alert tone over the police radio and an emergency response (lights and sirens) by patrol officers. The new policy was approved by command staff in 2014. He then submitted new Standard Operating Procedures (SOP) on how police will respond to intruders on school grounds which was approved soon thereafter.

In January 2017, Steve and four of his peers (two of which are current GD instructors: Jared Gross and Chris Troiano) were awarded “Officer of the Year” recognition for their involvement in a hostage-rescue mission. This same group was later presented with the Medal of Valor in May for the courage they displayed during this critical incident. In 2020, Steve was awarded the Life Saving Award from his police department for his heroic acts applying a tourniquet to a victim of a vehicle accident.

In 2021, Steve was deputized as a U.S. Marshall and serves that role presently in addition to his course teaching within Guardian Defense.

Steve graduated with a Bachelor of Science in Psychology, with a concentration in Criminal Justice, in 2005 from Nova Southeastern University. During his senior year, he completed an internship with the Davie Police Department.

In 2018, Steve and GD Co-Founder, Taylor Smith, were honored as “Entrepreneurs of the Year” by the SCORE organization for their work in developing training programs through Guardian Defense.

What Our Clients Say About Steve!

“I’ve just returned from a 3-day learning opportunity at the Athletic Business Show Convention. I sat in on many seminars and panels where I learned strategies for improving our youth sports department but I must say I gained the most from participating in your seminar presented by Steven Smith. I am a mother of four who has spent the last 12 years of motherhood AVOIDING the discussion of active shooters; avoidance has been my best coping strategy. I tear up at the mention of Sandy Hook and I wasn’t sure I could emotionally handle this session but as the new Youth Sports Coordinator at a Jewish Community Center I knew I had to “man-up” for the sake of my athletes and families. Can I just tell you – I entered that room fearful and uneasy. I knew the discussions were going to push my limits. I left feeling empowered, confident, and eager to get back to work and begin sharing what I learned. Thank you again for presenting.”

“Steven Smith is professional, knowledgeable and a great speaker. His presentation was dynamic and fluid.  Steven was able to relate to our audience of commercial property managers and service providers.  He gave us 5 tips to make sure we know what to do in the event of a violent situation at work.  It’s scary but necessary to be prepared.  The lessons we learned will greatly benefit us if we ever need to take action, to hopefully stay safe and unharmed.”

“Steve was professional and informative. He spoke clearly and concisely. He obviously knew his audience and topic.”

“Steve is very knowledgeable and had his heart and soul into the program.”

“Steve cares and wants you to win. Works with you. Very knowledgeable. Great job guys. Best I have had.”

“Steve was very calm and professional. He answered all questions with such patience and respect.”

– Director of Admissions at a Private High School